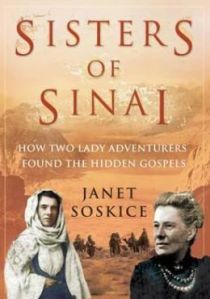 Recently Alice Bunnell asked me if the church library accepted donated books. I said yes, sometimes. It depends upon the book. She then described to me the book she wished to donate and my answer was “yes” it sounds very interesting. I took it home and began reading that same night. The Sisters of Sinai: How Two Lady Adventurers Discovered the Hidden Gospels by Janet Soskice is a marvelous book! It is well written and about a topic I knew nothing about.

The sisters of Sinai are Agnes and Margaret Smith, Scots twins raised in the mid-1800s by a wealthy widowed father who promised the sisters as teenagers that he would take them to visit any country whose language they learned. Thus when he died leaving them very comfortable they were ready to take on the challenge of further language study and travel.

In 1868 the “Lady Bible Hunters” left England for the Holy Land and a side trip down the Nile River. A year later they were home after a great adventure and with a determination to learn Arabic and travel by caravan in the Sinai Peninsula to St. Catherine’s Monastery at Mount Sinai. That later trip during which they discovered an ancient manuscript containing parts of the four Gospels set the course for the remainder of their lives.

Agnes and Margaret spent the years until their deaths in language study and travel (with time out for brief but happy marriages), often translating their findings themselves but having to rely on male scholars to give credence to their work.

Just the story of their travels, by camel and donkey caravan carrying with them all provisions, during which they still managed to dress for dinners served on china plates, would have made a marvelous story but when their significant discoveries are added and the difficulty these two audacious women had getting credit for their work, the story of their lives becomes a must-read.

This book, which is also in the public library as an ebook, can be found on the bookcase in the Dickinson Room.